The butterfly effect is a scientific theory.

This isn’t some washed up, fluffy theory, that has been chewed up and spit out by the fitness world. This isn’t “the secret.” And this certainly isn’t the magic key that will give you razor sharp abs overnight, bulging biceps in a week, or make that Instagram model fall madly in love with you with 3 little questions.

This is, however, a theory for living a successful and fulfilled life. It’s a theory that meteorologists and wall street financial analysts both utilize and respect, like a physicist respects gravity.

It’s a theory about how every. Single. Little action.

The idea came to be recognized as the “butterfly effect” after Edward Lorenz – an American mathematician and meteorologist – suggested that the flap of a butterfly’s wings in South America, might ultimately cause a hurricane, across the world, in India.

It may take a very long time, but the connection is real.

A very small change in initial conditions had created a significantly different outcome. If the butterfly had not flapped its wings at that exact moment in space and time, the hurricane would most likely never have happened.

Our everyday lives, are an ongoing demonstration of this principle.

Every action you have taken, are taking right now, and will take in the future, influences your future. No matter how small or insignificant it may seem at the time.

Have You Actually Been Taught To Be Fat? 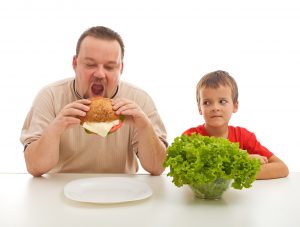 Throughout your childhood, did this saying ever come up:

“3 more bites and then you can have dessert!”

If you were like my parents, this was nightly occurrence. I mean how else were my parents going to get me to consume the mini, bland tasting, green tree-like forms of matter on my plate known as broccoli?

Those 3 bites of broccoli were not the problem. It was the dessert afterwards. It was the fact that my parents were teaching me (obviously by mistake) to ignore what true satiety feels like.

They were ingraining in me, that magically, there was always room for dessert…like my stomach had a separate storage place for it (which I am now convinced, after years of obscene chocolate binges, there is).

As I progressed through adolescence, I began to do this unconsciously; I would eat a meal, feeling full, then seemingly all of a sudden, I was hungry again.

Now as a fitness professional, I’ve had to relearn what true hunger is (I still love you, mom and dad), so all is well in the world. That being said, an argument could be made for this simple fact:

Had I not learned what true satiety is, would I still have consistently overeaten through adolescence? And thus, would I have ever become obese? And without the hardship of obesity, would I have ended up where I am today, writing to you, these glorious words, right now?

The high school I went to, and all surrounding schools, had a running evaluation every year during gym class, to asses your physical fitness level.

Call it the cooper test, the beep test, or legal torture – It certainly was my second least favourite part of high school (I’ll tell you about the taco truck and the one-armed homeless dude another time).

Anyways, I had the 12 minute run aka the Cooper Test.

While it’s important to run, the point here is that these tests were brutal, and confirmed one simple fact within me:

Running, or rather strenuous exercise = pain, lot’s of it.

Thus as I progressed in my years, I always subconsciously avoided any sort of heavy cardiovascular activity, because I knew it was gonna suck. Big time.

Did The Butterfly Get You This Morning?

How did you start your day this morning? I can bet you did something similar to yesterday.

Morning routines are one of the most powerful success hacks you can install into your everyday life. This is because it is the butterfly effect in full, unadulterated action.

Have you ever had a morning where you woke up before your alarm clock went off and felt great? You got up early, made yourself a well deserved breakfast (unless you are practicing intermittent fasting of course, in which you would have had time to make a delicious lunch,) beat rush hour traffic, and even got to work before the boss?

Those days are awesome.

Have you also had mornings where you snooze your alarm only to realize you have 5 minutes to get to work, so you throw on some wrinkled clothes, brush one tooth (how do you choose?) and spill coffee on your neatly wrinkled shirt because you are in a rush?

I’ve had both, and my guess is you have too. I’d also like to place a bet and say this:

You and I would choose the first scenario, every time.

And while you could argue that maybe, just maybe, you shouldn’t have hit snooze 17 times in a row, you could also argue that because you hit snooze once, your whole day was affected and went to shit.

A very small change in initial conditions, had created a significantly different outcome.

The point I am trying to tattoo to the inside of your skull, my young grasshopper, is this:

Getting stronger and changing your body requires you to string together a series of workouts over time. Remember that every workout, every bite of food, and every supplement you take or skip counts, and moves you closer or farther away from your goals.

What you do every single day matters more than you think. It can influence who you become 10, 20bnd even 30 years down the road. That one bite of cake may lead to a weekend of binge eating, setting your fitness goals back weeks.

Missing that workout may leave you room to let yourself slide in the future, delaying your body goals by weeks.

So today, and every day moving forward, I challenge you to take control. Choose to skip the one extra piece of pie. Don’t hit the snooze button and instead get up and dominate your day. Kick ass in the gym instead of skipping that last set.

Because you never know what kind of storm, one tiny action, may cause in the future.

Can you handle this 30 day push up challenge?