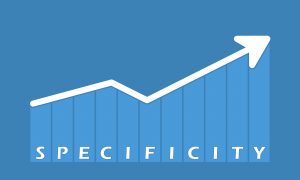 One of the most overlooked and underutilized tools in any direct response page is the specificity sweep. Simply put, the specificity sweep is an editing process that involves combing through your copy and identifying words and phrases that can be enhanced with specifics. Not only does this help you stand out, but it helps you polarize your audience which often leads to better conversions.

For example take a look at these 3 messages:

“Save more on your phone bill by switching At&T.”

“Save up to half your phone bill by switching to AT&T.”

You can see how much better his simple headline gets with each specificity sweep.

One of the biggest benefits of including specifics is that it increases credibility. The reason comes back to human nature. People that lie try to avoid specifics when they weave their tale, to avoid any complications.

However, by simply telling an extremely detailed story, it helps to increase their credibility and believability, because how could you add so much detail without you actually experiencing the lie?

Copywriting legends like Gary Halbert and Stefan Georgi love to include absurd levels of detail in their calls to action; because they know that the better they paint the picture, the more likely they are to get the conversion. Just take a look at the level of detail here:

The entire 10000+ word sales page goes on like this… are we really surprised this company and will do over 20M/year in its first year?

To a beginner or less experienced copywriter, it probably feels weird to give this level of intimate detail. But think of it from a reader’s perspective.

Taking action might cost the reader a lot: money spent, time, and inconvenience. By writing with a level of detail that they can imagine and visualize, this takes away from what’s going to happen when you order and what to expect.

If you want your prospect to taction, be specific. Use high actionable, specific language about exactly what to do and what is going to happen. Don’t seem vague, and don’t let them wonder what will happen next.

Here’s another example by Growth Lab

Headline: How I paid off 77k+ in student loans with my online business

In this headline example, GrowthLab uses a specific debt payoff number to capture their reader’s attention. They could have used a headline like “How I paid off all my student debts with my online business” but it wouldn’t be nearly as effective. The specifics grab your attention, highlight the truth to the story, and show a measurable benefit to the reader if they take action.

It’s really no surprise that when we see the title “World’s best coffee” we are positively certain that it is NOT the world’s best coffee. In fact, we are more likely to believe the opposite is true because of how vague the claim is.

A vague “guesstimate” won’t have the same impact because people are conditioning to believe specifics equal the cold hard truth. Like in the example before, $100,000 in one day is less credible than $123,756 in 24 hours, which is less credible than $123,756 in 24 hours with just three, 256 word emails. Without concrete facts, people assume things are made up, or worse – exaggerating.

The legendary Claude Hopkins sums it up perfectly in his book Scientific advertising:

“To say, “Best in the world,” “Lowest prices in existence,” etc. are at best simply claiming the expected. But superlatives of that sort are usually damaging. They suggest looseness of expression, a tendency to exaggerate, a carelessness of truth. They lead readers to discount all the statements that you make.

But a man who makes a specific claim is either telling the truth or a lie. People do not expect an advertiser to lie. They know that he can’t lie in the best mediums. The growing respect for advertising has largely come through a growing regard for its truth.

So a definite statement is usually accepted. Actual figures are not generally discounted. Specific facts, when stated, have their full weight and effect.

This is very important to consider in written or personal salesmanship. The weight of an argument may often be multiplied by making it specific.

One statement may take as much room as another, yet a definite statement be many times as effective. The difference is vast. If a claim is worth making, make it in the most impressive way.”

When shouldn’t you use specifics?

Specifics are not always usable. One such time is when using specifics can lead to legal issues, which is a big issue when writing weight loss offers. There have been many cases where copywriters claimed 23lbs in 23 days, which then led to 30%+ refunds and chargebacks as well as FTC involvement.

The rule of thumb here is if you are going to make a claim, be able to back it up.

Another issue is where specifics distract and cause confusion, damaging the flow of the writing. Ideally, your reader will gladly read your captivating copy all the way to the end – with no speed bumps from confusing specifics that might deter them on their drive toward your call to action.

How to perform the specificity sweep on your copy

As you can see, specificity is one of the most powerful copywriting tools in your toolbox to increase conversions. However, it can be more damaging than good if doesn’t add clarity or credibility, or if opens you up to potential lawsuits

When you are combing through your copy to perform a  specificity sweep, simply ask yourself: Can I add more intimate details to make this line more specific?

If the answer is yes, and it doesn’t hurt the flow of the copy, add it in. I can almost guarantee you will see positive results