The Hierarchy of Fat Loss, Where Results Come From

If you’re trying to lose weight, it can be difficult to know where to start. It’s a no-brainer that diet and exercise are both crucial to your well-being and your waistline. 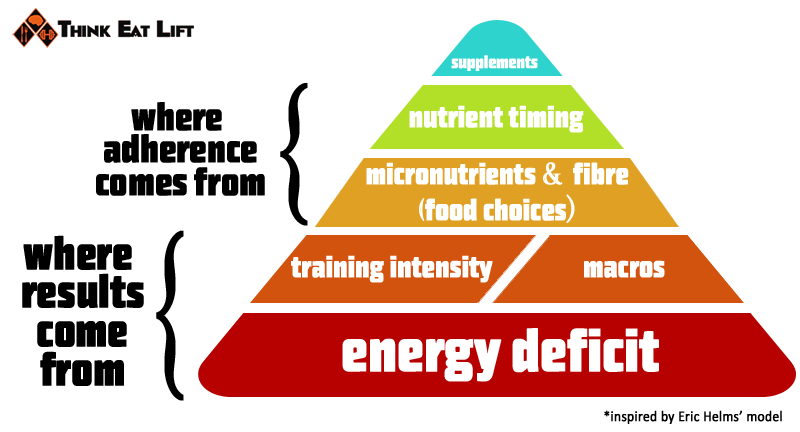 Side Note: Taken from thinkeatlift.com. Radu is a badass and everyone should be following him.

Stealing and flattery aside, if you want a body that turns heads and performs like a superhero, focusing on certain areas of fitness offer you more bang for your back.

Many popular TV shows, such as the biggest loser, put an emphasis on exercising to lose weight; while everyone else is trying to sell you supplements.

Let’s just be honest for a second: If everything worked no one would be fat. Obviously thats not the case. With the adult and child obesity rate at a staggering %30+ in North America, something needs to change.

The #1 Factor To Successful Weight Loss.

Rake a look at the nifty chart above.

Energy balance is number 1 for a reason. The law of thermodynamics states that to lose weight you must burn more energy than you consume. Pretty simple. Now whether you burn those calories by eating less Cadbury mini eggs per day or you take the 17 flights of stairs up to your office doesn’t really make a difference.

As promoted on the biggest loser as well as every major media outlet on the talent people are taught to try an “out exercise” a bad diet. As phenomenal as exercise is for your health, it simply isn’t effective enough on its own to be the tipping point for engineering “that” body.

Flash back to our mini egg conundrum for one second. I think we can all agree that not eating the 15 mini eggs, is far easier and time friendly, then taking those 17 flights of stairs – and funny enough it actually burns more calories! Even though many people believe the stairs workout would win this caloric battle.

In one 2010 University of Ottawa study, people guessed that they’d burned three to four times as many calories as they actually had during a workout; they also overshot when asked to consume the equivalent in food afterward.

You Only Exercise For 1-2 Hours Daily

Pareto was a cool dude. He was also really smart. He created a business law which states that 80% of your results will come from 20% of your effort.

Fortunately for us, when it comes to your dream body, this is most certainly true.

As a person with a life, you are busy. Fuck, thats probably an understatement. You probably are so busy that you feel like punching a hole in the wall when your internet is slow (It has to go to fucking space and back…relax).

At your peak you are probably exercising 1-2 hours a day. Probably less. However you have the opportunity to be eating or focusing on eating for around 16-18 hours. So doesn’t it makes sense to be focused on nutrition since you have 16 hours to play with that will affect your body?

Physical activity should not be ignored in the battle against obesity, and it should certainly be promoted because of its many other health benefits. BUT, expectations regarding exercise need to be tempered, and more emphasis needs to be placed on encouraging people to make better food choices (the type and the amount).

Find a weight-loss (or maintenance) plan that you can sustain long-term—and that doesn’t require you to go for a run every time you eat ice cream. Yes it is possible to eat dessert every day while enjoy 6 pack abs with religiously tracking every single calorie that enters your body.

Calculate your calorie deficit, practice intermittent fasting and consider exercise not only as a muscle sculptor but also as a as a buffer for those spontaneous mini egg indulgences.

And above all else, be consistent. Pick a plan or coach and stick with it for at least 90 days. Any less and you’ll be jumping from program to program, diet to diet or coach to coach, former spinning your wheels and never achieving your goals.

The most INSANE bodyweight workout

The best “super-carb” for a badass body